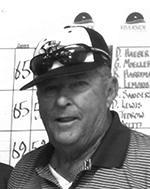 Sammy was born to Sammy “Sambo” Quarles, Sr. and Beatrice Obsta Quarles of Edna, Texas on April 12, 1934. Sammy Jr. is preceded in death by his wife, Darlene Roehe Quarles.

Sammy Jr. served his country in the United States Army. He retired as a manager of 40 plus years in the oilfield.  Sammy Jr. enjoyed many hobbies including drinking coffee each morning with his buddies, playing golf with his closest friends and watching high school football and baseball games. He also enjoyed hunting and fishing. It was important to Sammy to visit with family and friends, tell funny stories and make people smile. He was a true light in anyone’s life in which he was a part of.

In lieu of flowers, please donate to St. Jude’s Children’s Hospital or Our Saviour’s Lutheran Church in Victoria, Texas.