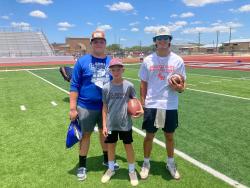 “It’s for kids up the Texas gulf coast so they can get exposure from college coaches,” said youth coach Cullen Boston, who was instrumental in getting the showcase to come to Jackson County. “The kids in this area get ignored. This way more college coaches get to see them.”

During the showcase, the athletes had a Q and A with the college coaches and pro scouts from the Dream Scouting Network and National Radar who were in attendance compiling results, and sending those results to colleges based on collegiate skill levels.

“I’m working with the Dreams Sports group and Recruit Nation and we will have stuff like this, so kid can get exposure from college coaches and an invite to the Dream All-American games,” Boston said.

The top performers at the showcase earned spots in the Dream All-American game and the Rising Stars game, which showcase the best-of-the-best of high school athletes from all over the U.S.