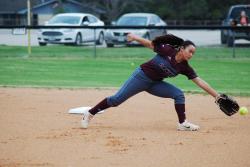 When you see a score of 22-17 in a box score, you may be wondering at what point the winning team successfully got their two point conversion. On Tuesday night however, it was the score of a softball game.

The Ganado Maidens and the Palacios Sharks played in this high scoring-if somewhat sloppy-exciting game. The offense of both teams were smashing the ball all game, but walks and errors allowed many extra runs to score.

“You just have to play hard every play and give everything you have,” Maiden Alexis Mojica said. “We’ve all been focusing on hitting and that was really obvious, we have lot of work to do defensively and we are a young team.”

Mojica is one of the two seniors playing for Ganado this season along with one Junior.

“We have 14 freshmen , two seniors, one junior, and three sophomores,” Maiden head coach Denice Atmar said. “We don’t care if the team we play has a lot of upperclassmen. If my players ask me who we are going to play I just say “a team we are going to beat.” I tell them it doesn’t matter who we are playing, just take care of yourself.”

The Maidens shut down the Sharks in the top of the first and put up three runs in the bottom when sophomore Layla Ledwig connected for a two run home run, her first varsity homer.

“I didn’t know that I had hit a home run until everybody started cheering,” Ledwig said. “It felt really good.”

Mojica followed the homer up with a double and took third on an error. She was then driven in on a Cailee Chambless groundout. Mojica was just getting started on her offensive display for the night.

*For the full article buy a Jackson County Herald Tribune newspaper or purchase an online subscription.