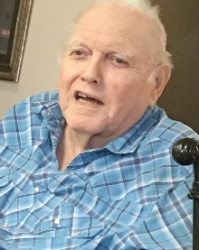 Buckshot (Willard Franklin Cihal) left this world when he was darn well ready at the age of 80 surrounded by his family in his blue brick home in Ganado, Texas on July 29, 2019. Buck enjoyed irritating his wife Willie Mae Kunetka Cihal over the past 60 years.

Buck made his grand appearance in Ganado, Texas on August 4, 1938 to Emil and Edna Bodungen Cihal.  On April 11, 1959 Willie Mae Kunetka vowed to put up with his BS for the rest of their lives. They had two children and bought one from Montgomery Wards, but we will never tell which one. Together, they led a great life. They would take a 15-minute trip to the store that would turn into an hour-long conversation with whoever. As a family, they took many vacations, went on fishing trips, and spent time on the beach, oh, and we can’t forget the casino!

His working life consisted of doing what he wanted, which changed periodically. He started in the rice fields with his Dad in Jackson County, then moved to the oilfield as a gauger, then decided to follow his dream and open Buckaroos. At Buckaroos, he was able to do everything he loved including talking to everyone who came in, barbecuing, talking to everyone that came in, baking his poppy seed cake, and talking to everyone who came in. After putting up with his BOSS (wife) at Buckaroos for many years, he decided to hang that up and jump in an 18-wheeler. After hauling anything that would fit in his trailer for anyone who needed something hauled in Jackson County, he finally retired.

Buck proudly served in the United States National Guard. He spent many years volunteering for Ganado Little League, even though his son was too scared to play, and was a proud member of the Ganado Volunteer Fire Department.

Buck’s life was full of laughs and jokes making everyone he was around smile. We hope that after reading this he was able to put one more smile on your face.

Our family would like to say thank you to everyone that helped us along the journey the last few years. Because of the help of so many, he was able to live out his life in the home he built many years ago.

A Mass of Christian Burial was held on Friday, Aug. 2 at Assumption Catholic Church in Ganado. Burial followed at Garden of Memories Cemetery in El Campo.