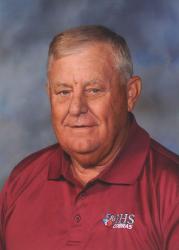 Ted “Buddy” Malek, Jr. of Edna, went to be with the Lord, on Sunday, January 3, 2021, at the age of 74. He was born in Aransas Pass, Texas on September 4, 1946, to the late Theodore Henry Malek Sr. and Mary Joan Poessel. He grew up in Edna, Texas and graduated from Industrial High School.

Buddy began coaching at age 19, when he coached his brother’s high school baseball team in Vanderbilt. Fifty-five years later, he ended life coaching in Vanderbilt as an Industrial Cobra Varsity Football and Head Varsity Softball Coach. In addition, during his career, he was an athletic director for Corpus Christi Academy, a coach for Banquete ISD and Edna ISD, and he coached in many other arenas as well, including Banquete Little League and other sports programs. He also managed Country Center, Inc. for his family and owned Country Center BBQ and Catering. He was also a long-time School Board Member for Banquete ISD and was active in many organizations such as Lions Club, Volunteer Fire and Emergency Services, and other community programs he was dedicated to.

He was a loving husband, father, grandfather, brother, uncle, coach and friend. In the late 1960’s, Buddy attended a dance in Hillje, Texas. There he was struck by the lightning bolt of love, meeting Barbara Gail Wright. The two were married September 24, 1970, and lived their love for 28 years, raising their 3 children, Bowen, Jennifer and Tyson.

Gail passed away in 1998. She was truly his first and last love~ he continued his devotion for his family and friends with her spirit by his side, never wavering in his love for all within his world. Buddy’s greatest joys came from his children and, ultimately, his four grandchildren. He was incredibly proud to be able to coach his granddaughter, Avereigh Gail, for the past three years, delighting in her talent and determination. Listening to his songbird granddaughter, Adysen, brought peace to his heart and a soft smile to his face. Watching young grandson Myles play Little League and flag football gave him excitement and hope for his grandson’s future in athletics. Grandson Clayton’s resolve and resolution to run his best race in cross country gave Buddy great pride, as much as watching Clayton succeed in the marching band and his academics.

Over his years, Buddy gained the moniker of “Coach” which stuck with him his entire life.

Coach touched the lives of every person he met. He was truly a man for all seasons, ready to cope with any contingency, showing grace at every turn. He was humble, his word was impeccable, his integrity unmatched. Coach found light in every person and helped them find it within themselves. Coach Malek will never leave the hearts of the fellow coaches, students, and athletes he mentored and motivated over the decades. He loved them and treated them all as family, forging lifelong relationships with them. Many of his former players credit him with their successes, not only in regard to sports, but their positive outcomes as they move through their life. He taught by example, asking only what he asked of himself. His core values of a strong Christian faith, respect of self and others, and motivation to try the thing most feared and succeed in that led countless numbers of people to gain lasting pride in themselves. Coach remained proud of each and every student and athlete he coached and mentored. He would glow with delight when hearing of the triumphs of his former students as well as his family and friends.

Buddy welcomed everyone to his home, people were drawn to his table, whether it be inside or outside, enjoying his food and company. Often the loudest laughter came from Buddy, as he was his own greatest audience when telling a joke or story. He embodied qualities expressed by T.S.Elliot: “to do the useful thing, to say the courageous thing and to contemplate the beautiful thing~ that is enough for one man’s life.” Those distinctive traits and his love will be the guide for all of us touched by his magical spirit. We can be forever grateful to his family for sharing him with the world. All he impacted with his unconditional love, integrity, honesty, and kindness are better people for having been graced by being part of his world~ he made each of us feel separately special.

Sadness has overtaken Buddy’s family, friends, and all he gave his friendship, love, and care so freely to. It will slowly pass as we wish this dear man endless peace, love, and contentment. Be positive that he is either dancing with his Gail, most likely to a Neil Diamond song, or standing out on a sports field in Heaven, his booming voice calling out so we can eventually find our way to him.

Deep peace to Coach, Dad, Paw~ he is a true hero and his selfless compassion will be everyone’s guide: just keep your hearts and minds open, he will find each of us.

He is preceeded in death by his parents; his wife Barbara Gail Wright Malek; and his son-in-law Troy Allen Stephenson. On Thursday, January 7th, a Celebration of and Tribute to Coach Malek’s life will be held at 6:00 pm at Cobra Football Stadium in Vanderbilt, Texas.     Visitation will be held on Friday, January 8, 2021, from 9:00 am to 10:30 am with a rosary to be recited at 10:30 am, and a funeral mass to follow, all in the Holy Family Catholic Church in Victoria. Burial will be held on Saturday at 11:00 am, at the Memorial Park in Robstown, Texas, where he will be laid to rest with his beloved soul mate.

Pallbearers are Sonny Strelec, Josh Lovelady, Craig Nairn, Rob Elkins, Kensey Allen, Jon Malek, James Dixon, Blake Rogers, Jeff Hellums, and Ed Sralla. Honorary Pallbearers are Coach’s Pinto Bean Coffee Crew, the many coaches who coached alongside him over the years, and the countless students and athletes he coached, taught, and mentored over his lifetime.

In lieu of flowers, memorial donations may be made to the Ted “Buddy” Malek Memorial Scholarship Fund at the First State Bank in Ganado, PO Box 254, Ganado, Texas 77962.

Arrangements are under the direction of Oaklawn Funeral Home in Edna. 361-782-2221. www.oaklawnfhednatx.com.