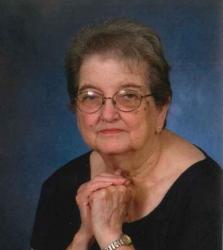 She was a lifelong resident of Edna who married the love of her life, Eugene Reckaway, on November 7, 1951. They were married for 60 years. Ruth was a dedicated jewelry sales associate at Walmart for 35 years before retiring in 2012. She loved being able to talk with her customers and coworkers. She was a lifelong member of the First Baptist Church of Edna. The church held Ruth Reckaway Day on Sunday, August 22, 2010 to honor her dedication to the church and its members. She was immensely proud of that accomplishment. She loved her church family and the ladies of the Esther Class and WMU Group.

Ruth taught Sunday school for 50 years and loved every one of the children she had over the years.

Ruth especially loved to travel with her sisters all over the United States with just a carload of women (I would have loved to listen to their conversations on those road trips!). They took tons of photos and had the times of their lives. As if that were not enough, Ruth loved to play cards and dominoes with anyone that would sit and play rounds with her. She prayed and read her bible daily and was very faithful to the Lord. She was a serious reader, especially those Romance novels!

She was a loving wife, mom, nanny, sister, poochie, and the most loyal and faithful lady who enriched the lives of many people and who would do anything for anyone. Ruth will be greatly missed but her legacy of love and strength will remain by her family and friends.

Ruth is survived by her loving daughter, Elizabeth Dominguez, and her husband Mario, who Ruth considered her son; grandsons, David Erdelt and his wife Amy, Joseph Erdelt and his wife Sarah; granddaughters, Briatta Dominguez and Alyse Dominguez; 3 great grandchildren, Karsyn, Kennedy and Josiah; sister, Mattie Rab and her husband Lonnie; as well as numerous nieces, nephews, cousins and dear friends.

Funeral Services were held at 10 am on Wednesday, March 17, 2021, in the First Baptist Church of Edna, with Brother Robert Krause officiating. Burial will follow in the Memory Gardens Cemetery of Edna.