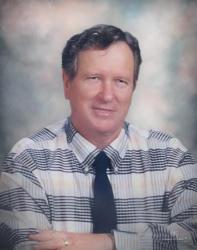 He was born in Victoria, Texas on November 6, 1947, to the late Lee “Roy” Young and Dorothy Bruce.

Lee grew up in Bloomington. After he graduated high school he went to Victoria College and Texas A&M in Kingsville. He earned a degree in both Agriculture Education and Elementary Education. After college, he served time in the Army and was stationed in New York. He left the service and moved back to Texas. He started working for BP in west Texas.

When his son, Jason, wanted to move back to south Texas, they moved to Goliad and Lee began teaching in Kennedy.

Lee met Susan in 1996 and they were married on June 7, 1997. After they married, he moved to El Toro. During their first year of marriage he worked offshore. In 1998 he left the oil industry and started teaching in Bloomington.

That same year Lee bought his first three cows. In 1999 he started teaching in Edna and taught for seven more years before retiring from teaching. In 2006, he returned to the oil field as a gauger with Total and then DNS. Lee retired from that as well to focus on his cattle business.

He was an animal lover and a rancher at heart. His cows, dogs, and cats were especially important to him, and he loved when his grandchildren, Abby and Ty, came to help him feed the cows. Lee was a very conscientious person and was well like by all who knew him. He loved his family, and they all loved him. We are heartbroken by his death, and we pray covid will soon be gone, as it has taken our loved ones sooner than we hoped.

Arrangements are under the direction of Oaklawn Funeral Home in Edna. 361-782-2221. www.oaklawnfhednatx.com.