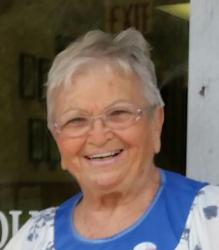 Erlene J. Easterling, 87, passed away on March 27, 2021, at Southbrooke Manor Nursing and Rehabilitation Center, following complications from a stroke and heart failure.

She was born April 28, 1933, in Covington, Virginia, the daughter of Harrison James Bush and Cora Belle Kellison.

Erlene graduated from Burlington High School in North Carolina. After several years working in the mills of Burlington, she married Harold Lewey and became the wife of an Airman, traveling the world and raising three children.

Following a divorce in 1980, she pursued nursing, becoming a Licensed Practical Nurse. In 1998, she married Ralph Sanford Easterling and they proceeded to travel the country in their RV, settling in Edna, Texas in the fall of 1999 – her home since then. She loved the grand (and great) children, the beach, and Texas.

There will be a remembrance at a date to be determined once she is interred with her husband at Arlington National Cemetery.

In memory of Erlene’s life, the family request donations in lieu of flowers to either: