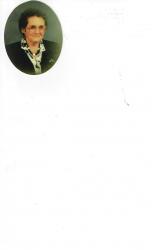 Agnes was a loving wife to the late Ocie Fikes. She loved her Faith and her God for so many years. She attended daily mass and led the Rosary before Mass. Every Monday for years she would go after Mass and visit Care Inn Nursing Home and Jackson County Hospital Patients.     Afterward she went to visit her brother and would play dominoes, talk Czech, and enjoy coffee and sweets. Family and friends were most important to Agnes. She was always helping others and never met a stranger. She loved cooking and baking and insisted you eat. No one ever left her house hungry.

She loved playing dominoes, and winning, of course! Her favorite time of the day was sitting outside on the porch swing.

Viewing and Visitation was held on Thursday, March 18th starting at 9 am, with Rosary at 10 am, followed by a Funeral Mass at 10:30 am at St. Agnes Catholic Church in Edna with Father Michael Petering officiating. Burial will follow at St. Joseph Catholic Cemetery in Yoakum.     Pallbearers were; Wesley Fojtik, Tommy Fikes, Sr., Bobby Doelitsch, Randy Janis, Jimmy Doelitsch, Paul Wulf, Sr., Chris Fikes, Jr., and Heith Fikes. Honorary pallbearers will be all of her grandchildren, great- grandchildren, great-great-grandchildren and God children.

The family would also like to thank Ganado Nursing Home and Rehab, Hospice of South Texas, Home Health and Deborah Smith who has been her caregiver for several years.